Mrs. Carolina Ganske was born and raised in Bolivia, where she obtained a Bachelor’s degree in Marketing and Advertising at Universidad Tecnológica Privada de Santa Cruz. In addition to her Bachelor’s degree, she also completed Hawaii Pacific University’s English as a Secondary Language (ESL) program in 2009. She has lived in the United States for more than 11 years and has had the opportunity to live in 6 different states. She has also had the opportunity to travel across the country several times and experience its beauty and cultural richness. Prior moving to the United States, Mrs. Ganske worked as a news anchor at the local television station in her hometown. After moving to the United States, she worked as a volunteer for several years. She co-chaired the Migrant Ministry at Sacred Heart Church in Norfolk, Virginia from 2011- 2013. The main focus of her job there was to tutor ESL students and work as a translator for families on the Eastern shore of Virginia. She also served as a Spanish RCIA instructor at Holy Redeemer in Madison, Wisconsin from 2013 - 2015. Most recently, during 2017 – 2018, she volunteered as a 7th grade religious educator for the Lifelong Formation program at St. Katharine Drexel Parish in Beaver Dam, Wisconsin.

Mrs. Ganske currently lives in Beaver Dam with her husband Chris and their 3 children, who are students at SKDS. Mrs. Ganske enjoys cooking, traveling and especially spending time with her family. Her goal in teaching is to teach the tools and knowledge necessary for basic communication in Spanish to beginning students and, in addition, to increase the level of proficiency for those who either have previous knowledge or are heritage speakers. Mrs. Ganske is currently enrolled at Edgewood College in Madison, where she is working to obtain a Master’s Degree of Arts in Education with emphasis in foreign language instruction. 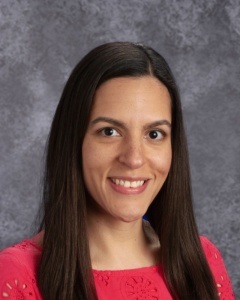